On The Advent Of Underground Station, Rank Political Poseurs And A Dangerous Street Without Crosswalks Or Stop Signs. 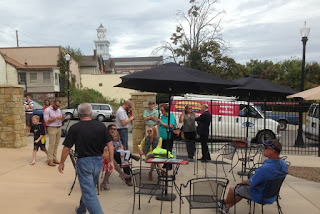 Hmm ... it's the weird institution of the ribbon cutting, when grasping local politicians and corporate welfare dispensation chambers you haven't ever seen before somehow arrive nonetheless, breathlessly accepting credit for things they didn't do.

Then they disappear again. At least there's that. 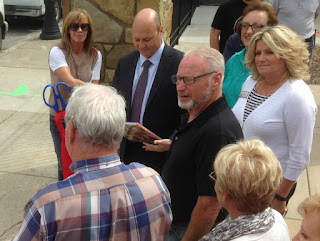 I'm delighted for the developers, tenants and residents at Underground Station. You're doing it every day, not every now and then. Unfortunately, there's something you all need to bear in mind: Jeff Gahan does not understand what you're about, and he has no intention of lending a hand apart from the Friday photo op, which now will be used to illustrate his tender concern for local businesses. 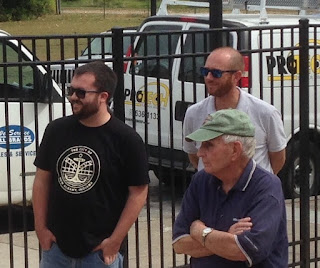 As my Italian friend pointed out, "Camorra" is a more accurate term than Mafioso. Notice the city's new marketing symbol, with Team Gahan's branded slogan to follow: "We're Anchored Firmly Into Place. Come Stay Put with Us." 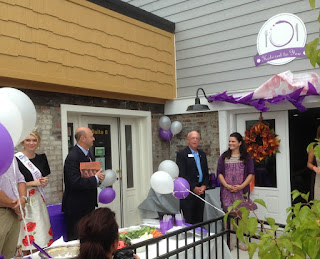 Why is the mayor carrying a paving stone? 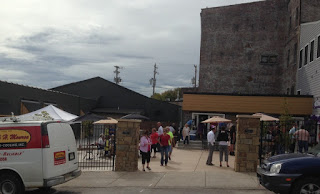 When I left the ceremony yesterday, I walked from the entrance on Bank Street to the intersection of Bank and Main. Only recently, New Albany's hand-picked Bored of Works paused briefly from stifling the street piano to reject the idea of a four-way stop at this intersection. Notice the driver below, who cannot see and is easing out into a gray area, where often traffic moves quite fast. 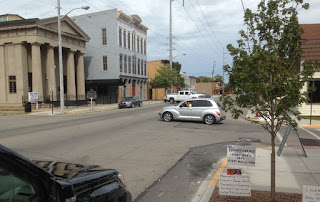 I'm so glad you asked. Twice this week, Mayor Gahan told audiences that something special just had to be done for Main Street owing to traffic moving 60 miles per hour. He also accused me of being frustrated because I live on Spring Street -- where more traffic than ever before travels 60 mph since Main Street was made "special", which means that in essence, Gahan has made the overall speeding problem worse. He seems very proud of that.

Here, you see a section of Main Street, where I've seen traffic moving quite fast, and yet nothing special is being done to help cars navigate a crossing when more of them will be doing so than ever before because Underground Station now is open. 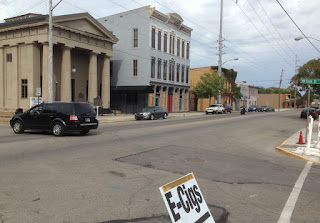 Look at these wide expanses of asphalt, and now imagine people walking back and forth from other downtown businesses and events. Notice the complete absence of crosswalks or any other effort to ease their passage.

Ironically (pathetically), at Thursday's LWV debate, Gahan claimed credit for being the two-way streets mayor by virtue of paying the nation's foremost expert in design-driven walkability to conduct a study. Noting the obvious fact that nothing whatever has been done to date, and with no public plans to act as the "ripple effect" of bridge tolls draws ever closer, Gahan answers that his crack team of non-national experts are carefully mulling the options of what was written as a shovel-ready plan -- and the random darts are being tossed into voodoo dolls over Bud Lights at the Roadhouse as we speak. 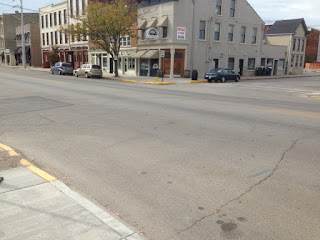 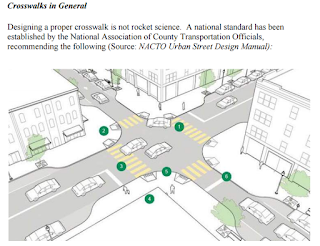 Crosswalks may not be rocket science, but this is New Albany, and our mayor is Jeff Gahan. If Gahan insists on making the point that something must be done to alleviate high traffic speeds, conducts a study, piddles for six months, then decides to wait another 18 months before contemplating a starting date, isn't he acknowledging the existence of an unsafe situation he's doing nothing to address?

There's nothing "fundamentally better" about any of this -- except for the unsubsidzed, non-incentivized and largely ignored efforts of independent local businesses, entrepreneurs, contractors and developers. They're doing it every day, not just every now and then.

Just remember that the one solid, fundamental action the city could take to help Underground Station prosper in the absence of assistance in any other conceivable form would be to GET THE STREET INFRASTRUCTURE RIGHT without dithering and obfuscating,

Ready for a change yet?