Not Everything That Looks Like Majolica Is Really Majolica

Any regular on the auction scene knows that general auctions pieces that are sometimes listed as majolica, aren't majolica.

One of these most commonly found items are the wonderful antique game terrines made in France by Pillivuyt. These gorgeous terrines were made by the company for quite a long time. I think I once read that they started production around 1890. I know I remember seeing them for sale new at Bridge Kitchenware on the upper east side of New York and Dean and DeLuca in Soho when I first got out of college in the 1970's. They were always very expensive, about $100 each, and came in a variety of sizes and forms. (The number on the base will tell you what size it is. They were numbered from 1-5 with five being the largest.) The company stopped making then around 1990 but they have retained their popularity on the secondary market often bringing several times their original cost at auction. 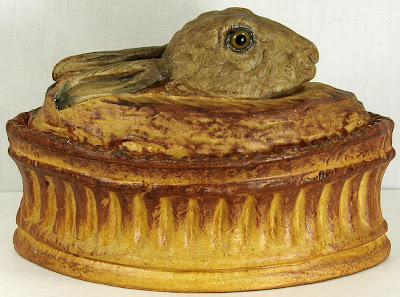 But as lovely as these are, they aren't majolica, they are enameled porcelain. That isn't to say that they don't compliment majolica well. Because most majolica was intended for use in dining service, these terrines fit in quite nicely on a table with majolica serving pieces. I've bought a number of them myself over the years and find them both decorative and functional. They are oven safe and quite hardy for their intended use, unlike the more fragile majolica terrines we see. 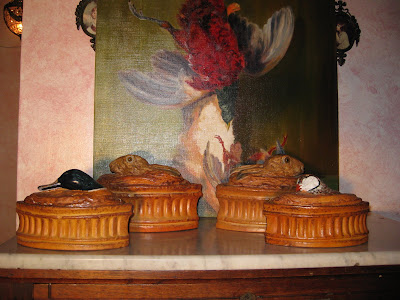 So if you see them advertised as majolica feel free to let the auctioneer know their true nature, then go ahead and buy them up!They never fail to grab attention at a beautifully set buffet!