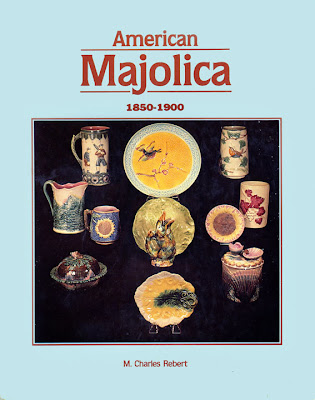 One of the main reasons I wrote my books on Etruscan Majolica was because of Charles Rebert.
I met him in the last couple of years of his life in Adamstown, PA. where he had a booth at the Black Angus Antiques Cooperative. I was a new dealer trying to learn what I could about majolica and he was anxious to share what he knew with anyone who would listen. His poor health kept him at home much of the time but when he was at his booth I always put aside some time to speak to him. He told me about all the wonderful things the Etruscan Works had made. He piqued my curiosity so that I wanted to learn more. 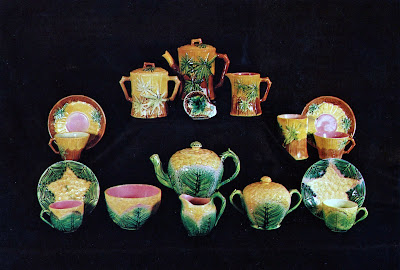 He was a fascinating man who had a true love of American majolica. His Etruscan collection was one of the finest I have ever seen. Ironically I didn't get to see it until after he died and it was being sold off by his partner. Eventually, I got to photograph some of the pieces for my own book on Etruscan Majolica like the one below. Some pieces also found their way to the Phoenixville Historical Society Etruscan museum collection where they can be seen today. 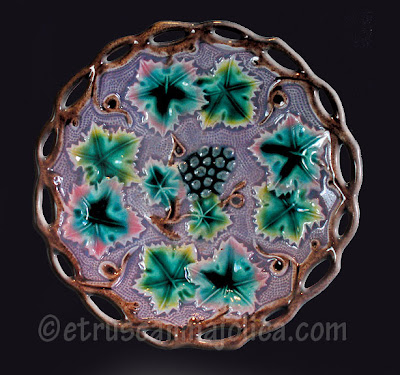 His book, American Majolica 1850-1900 was the first major book on American majolica. Truth is, it was one of the first books on majolica in general. It wasn't in print for very long. Only three years after it was published in 1981 it was withdrawn by the publisher. The two Mariann Katz-Marks Majolica Pottery books had been been released and their better photographs, price guide and more general topic overshadowed it. By the time I discovered majolica in late 1984 the book was a hot property on the secondary market selling for hundreds of dollars at auction. I remember finding my copy in 1987 in an antiques co-op in Loveland, Texas for $25. I must have read it and re-read it a dozen times that first year I owned it. 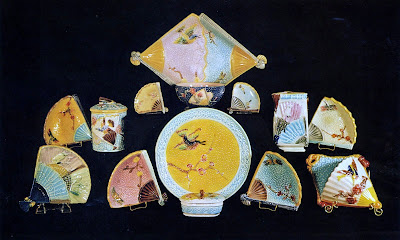 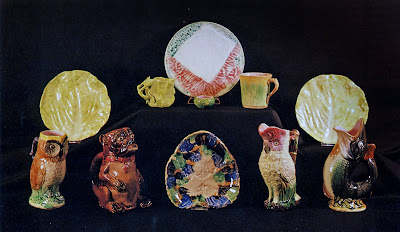 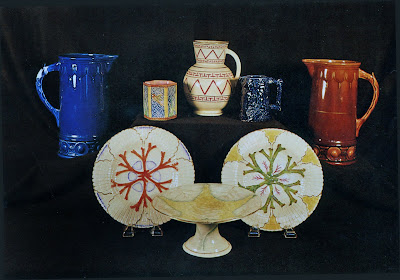 Now, almost 30 years later, it hasn't really aged very well. It just wasn't a very good book. The photographs were small and terrible in quality and much of the information was incorrect, but to date it is the only book to tackle this difficult topic. The effect it had in the market place was, in the long run, more important than the content he recorded. It expanded awareness of majolica and was in reality one of the references used by Karmeson and Stacke in their definitive book on the topic. Many of the Etruscan pieces photographed in his book ended up in my book on Etruscan Majolica as well as the Karmeson Stacke book. It amuses me to think what he would have said if he had seen this effect his book had. I think he would have loved it! 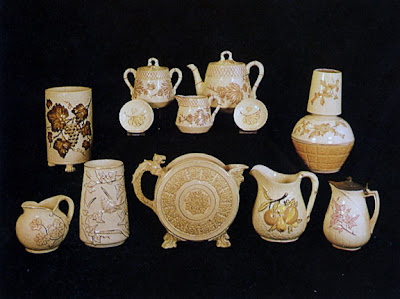 The book no longer commands the high prices it used to bring because of all the other books on majolica that are now available, but if you want a piece of majolica history you can still pick it up on the secondary market for about $50.